Writing The Truth They Don't Want You To Know!!! 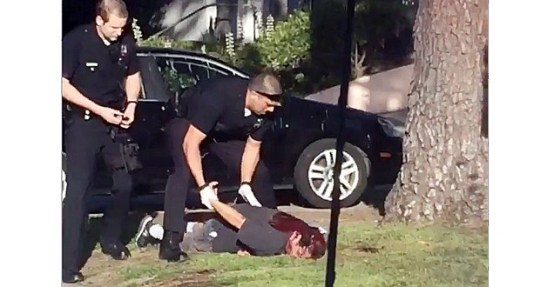 A yet to be identified man was shot by two Los Angeles police officers Friday evening with the gruesome aftermath captured on video and posted to Twitter by a witness.

I just witnessed a man get his brains blown out and I have a new look on life.

The horrifying and disturbing video was captured by a twitter user named Manny, who said he saw the officers fire three shots, which he initially believed to be fireworks.

The officers are seen turning over his body, revealing a massive amount of blood on the back of his head and clothing. Instead of providing medical assistance, they are seen handcuffing him. He was still alive at this point in time.

A motorist shot graphic video of the officers handcuffing the man with a visible head injury.

“I didn’t see a weapon, he didn’t seem to hurting anyone, but I don’t know, I only heard the shots and saw he was shot in the head.” Manny told PINAC.

We asked the witness if the police or investigators have spoken to him about what he saw, and he confirmed that they have not.

According to CBS Local:

Authorities told her the suspect was taken to a hospital and is in critical condition.

According to a LAPD spokesperson, the officer stopped a man in his early 30s just before the shooting occurred.

The man, his harm allegedly wrapped up in a towel, said he needed help. As he got closer, the officer said the man was holding a gun.

“The officer got out of his vehicle and said ‘Drop the gun, drop the gun,” said a police department spokesperson.

Neighbors told Hopper they then heard three shots and lots of screaming from witnesses.

No officers were injured.

Police did not say if a weapon was recovered.

UPDATE: The Los Angeles Times reports the man shot did not have a gun, even though they shot him because he would not “drop the gun.”

The man apparently approached the officers for help, possibly because he had injured his arm or hand, which is why he had it wrapped in a towel.

He made the mistake of raising his arm to show the officers his injury, but that made them fear for their lives, which is why they opened fire.

He is still listed in critical condition and has not yet been identified.

Thank You for watching and reading. “LET FREEDOM RING” God Bless us all.

Follow Abolish the Corporate Government Matrix "of 1871." on WordPress.com

Abolish The Corpoate Government of 1871

“Practice things like an eye gouge. It takes very little pressure to injure someone’s eyes.” “It’s not boxing, it’s not…

District of Columbia Organic Act of 1871 From Wikipedia, the free encyclopedia Jump to navigation Jump to search For…

Can’t find what your looking for: Search

Since 1871 the United States president and the United States Congress has been playing politics under a different set of rules and policies. If you want to know more go here, http://spiritwolf04.com/2012/06/29/abolish-the-corporate-government-of-1871-our-sovereignty-was-stolen-from-us/ I am passionate about people and our freedoms that God gave us as people, per our organic constitution, and our Government today and as of 144 years ago they have slowly been taken our rights and freedoms away, I'm here to let people know the lies and deceit that the governments around the world and the main stream media have been telling the American people, all the propaganda they have been spreading to keep you in fear and in slaved. I also come from a military background both Marine and Army. I see the corruption that is going on within the the "Government". They have taken God out, we know what happens when we take God out, we will fall.

Abolish The Corporate Government Of 1871

Abolish The Corporate Government of 1871